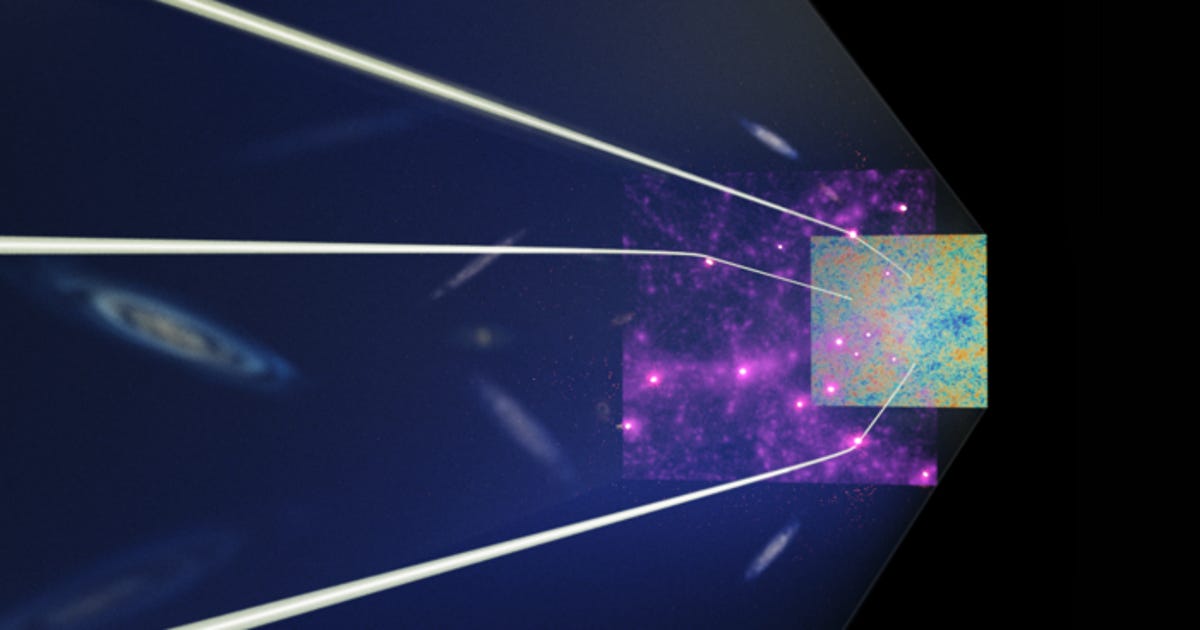 Scientists investigated the most distant dark matter halos ever studied by using gravitational lensing, a phenomena once predicted by Albert Einstein.

What they found while observing these rings could affect a well-known model of cosmology.

I mean, we know it’s there.

Galaxies, including the Milky Way, are spinning so rapidly that our physics predicts everything inside should be flung outward like horses on an unhinged merry-go-round. But obviously, that’s not happening. You, me, the sun and Earth are safely anchored. Therefore, scientists theorize that something — probably in halo shapes — must surround galaxies to protect them from falling apart.

Whatever comprises those boundaries is simply called dark matter. We can’t see it, we can’t feel it, and we don’t even know if it’s one homogenous thing. We only know that dark matter exists. It’s the epitome of elusiveness.

But despite our inability to view or touch the material itself, experts have interesting ways of identifying the effects it has on our universe. After all, we deduced dark matter’s presence in the first place by noticing how it holds galaxies together.

And on Monday, scientists who took advantage of that principle announced their remarkable new findings. With a toolkit composed of warped space, cosmic residue left over from the Big Bang and some powerful astronomy instruments, they detected a deep space zone of previously unstudied dark matter halos – each situated around an ancient galaxy, dutifully protecting it from living out a merry-go-round nightmare.

These whirls, according to a new study on the find published in Physical Review Letters, date back 12 billion years ago, just under two billion years post-Big Bang. That might very well make them the youngest dark matter rings ever studied by humanity, the study authors suggest, and potentially the prelude to cosmology’s next chapter.

“I was happy that we opened a new window into that era,” Hironao Miyatake of Nagoya University and author of the study, said in a statement. “12 billion years ago, things were very different. You see more galaxies that are in the process of formation than at the present; the first galaxy clusters are starting to form as well.”

More than a century ago, when Albert Einstein coined his famous theory of general relativity, one prediction he made was that super strong gravitational fields stemming from massive quantities of matter would literally warp the fabric of space and time, or spacetime. He turned out to be correct. Today, physicists tap into the concept by calling on a technique dubbed gravitational lensing to study very faraway galaxies and other phenomena in the universe. It works something like this.

Imagine two galaxies. Galaxy A is in the background and B is in the foreground.

Basically, as light coming from galaxy A passes by galaxy B to get to your eyes, that luminescence gets distorted by B’s matter – dark or not. But this is good news for scientists, because such distortion often magnifies faraway galaxies, kind of like a lens.

Further, there’s a sort of reverse calculation you can do with this light warp to figure out how much dark matter surrounds galaxy B. If galaxy B held a lot of dark matter, you’d see a lot more distortion than expected from visible matter within. But if it didn’t have that much dark matter, the distortion would be much closer to your prediction. This system has worked pretty well, but it has a caveat.

Standard gravitational lensing only allows researchers to identify dark matter around galaxies that sit something like 8 billion to 10 billion light-years away, at maximum.

This is because as you look deeper and deeper into the universe, visible light becomes harder and harder to interpret, eventually even turning to infrared light that’s totally invisible to human eyes. (That’s why NASA’s James Webb Space Telescope is such a big deal – it’s our best shot at catching the faintest, most invisible light stemming from the distant cosmos.) But what this means is that visible light distortion signals for dark matter studies become far too faded beyond a certain point to help us analyze the hidden stuff.

Miyatake came up with a workaround.

Perhaps we can’t notice standard light distortions to detect dark matter, but what if there’s another type of distortion we can see? As it turns out, there is: microwave radiation released from none other than the Big Bang. It’s pretty much Big Bang heat remnants, formally known as cosmic microwave background, or CMB, radiation.

“Look at dark matter around distant galaxies?” Masami Ouchi, a cosmologist at the University of Tokyo and co-author of the study, said in a statement. “It was a crazy idea. No one realized we could do this. But after I gave a talk about a large distant galaxy sample, Hironao came to me and said it may be possible to look at dark matter around these galaxies with the CMB.”

Picking up pieces of the Big Bang

“Most researchers use source galaxies to measure dark matter distribution from the present to 8 billion years ago,” Yuichi Harikane, an assistant professor at the University of Tokyo and co-author of the study, said in a statement. “However, we could look further back into the past because we used the more distant CMB to measure dark matter. For the first time, we were measuring dark matter from almost the earliest moments of the universe.”

To arrive at their results, the new study team first collected data from observations taken by the Subaru Hyper Suprime-Cam Survey.

That led them to identify 1.5 million lens galaxies – a bunch of hypothetical galaxy B’s – which could be traced back to 12 billion years ago. They then called on information from the European Space Agency’s Planck satellite on Big Bang microwaves. Put it all together, and the team could learn if and how those lens galaxies distorted the microwaves.

“This result gives a very consistent picture of galaxies and their evolution, as well as the dark matter in and around galaxies, and how this picture evolves with time,” Neta Bahcall, a professor of astrophysical sciences at Princeton University and study co-author, said in a statement.

Notably, the researchers emphasized their study finding that dark matter from the early universe doesn’t seem to be as clumpy as our present physics models suggest. Down the line, this bit could adjust what we currently believe about cosmology, mainly theorems rooted in what’s called the Lambda-CDM model.

“Our finding is still uncertain,” Miyatake said. “But if it is true, it would suggest that the entire model is flawed as you go further back in time. This is exciting because if the result holds after the uncertainties are reduced, it could suggest an improvement of the model that may provide insight into the nature of dark matter itself.”

And next up, the study team wants to explore even earlier regions of space by tapping into information held by the Vera C. Rubin Observatory’s Legacy Survey of Space and Time.

“LSST will allow us to observe half the sky,” Harikane said. “I don’t see any reason we couldn’t see the dark matter distribution 13 billion years ago.”