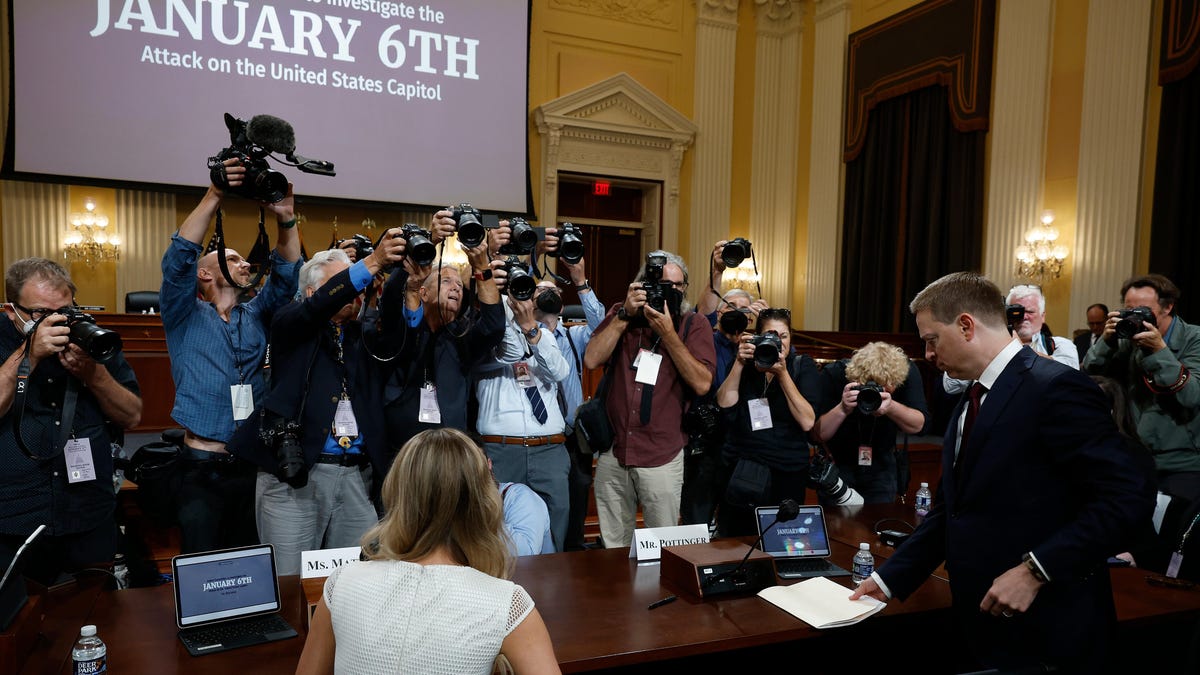 Following a hearing a week ago in which the case was made that Donald Trump had personally instigated the insurrection at the U.S. Capitol last year, the House Select Committee investigating the Jan. 6 attack kicked off its ninth hearing with a slate of primetime interviews designed to solidify its case against the former president by showing that his inaction kneecapped the already paltry response from military and police officials.

The testimony on Thursday evening centered around what’s come to be known as the “187 Minutes” — the duration of time that passed between the start of the melee and the tweeted video in which Trump eventually ordered his supporters to stand down. Witnesses who were in the White House during the 187 Minutes described how, during that period, Trump sat in the dining room of the White House watching Fox News, refusing to do anything that might bring the mob to disperse. Instead, he placed calls to senators whom he believed would aid him in delaying the certification of the Electoral College vote to prevent his campaign rival, Joe Biden, from being named his successor. The video that marks the end of the Capitol riot was itself ambivalent: Trump told rioters, “We love you. You’re very special. I know how you feel.”

During that gap, which begins at the conclusion of Trump’s speech at the park south of the White House known as the Ellipse, law enforcement witnesses said that Trump would attempt to order his Secret Service driver to deliver him to the U.S. Capitol building. By that time, a mob following the president’s directions had already violently engaged with a handful of police officers who were futilely fighting to defend the grounds.

“Before he went on stage, he knew some of [his supporters] were armed and prepared for combat,” said Rep. Elaine Luria, a Democrat of Virginia. “During his speech he implored them to march to the Capitol, as he’d always planned to do. By the time he walked off the stage, his supporters had already breached the outer perimeter of the Capitol, at the foot of the Capitol Hill.”

According to witnesses, the Secret Service adamantly refused to follow the president’s orders — ostensibly to protect him from joining the mob in what had become a chaotic and unsafe environment.

Luria presented a video of Mark Robinson, a former D.C. police sergeant, whom she said had been assigned to the president’s motorcade. Robinson, now retired, said he’d been made aware of reports that day that some of Trump’s supporters were armed. He’d also been told, he said, the president was “upset and was adamant about going to the Capitol” and that the discussion between Trump and his Secret Service detail had gotten “heated.” Robinson testified that he’d been assigned to the motorcade “over a hundred times,” and that he had never heard of another instance in which Trump had challenged his detail.

The committee displayed photographs taken of the president as he arrived back at the White House, where Luria said within 15 minute of leaving the rally, he was aware an attack was underway. From there, he then spent approximately two and half hours in the White House dining room, making no attempt to quell the violence he and his closest advisors had instigated at the Ellipse. The committee had interviewed numerous military and police officials, Luria said, none of whom were aware of any attempt by Trump to put an end to the insurrection, even after supporters began their attack on police.

In a video presented by the committee, Trump’s press secretary, Kayleigh McEnany, testified that as the attack was underway, Trump requested a list of phone numbers belonging to U.S. senators. Contemporaneous notes by McEnany showed that he contacted them one by one. Luria said that calls were placed by Trump in an attempt to persuade them to delay or object to the certification of votes, but that no record exists of which senators Trump called.

“Because the presidential call log is empty, we do not yet know precisely which senators President Trump was calling. But we do know from Rudy Giuliani’s phone records that President Trump also called him at 1:39, after he had been told that the riot was underway at the Capitol,” she said.

Luria said phone records showed the Guiliani call lasted approximately four minutes, and that Fox News was playing on the television in the room as it ended. Video of Fox News’ broadcast played by the committee showed images of the MAGA crowd surrounding the Capitol building. A reporter is heard saying, “The president, as we all saw, fired this crowd up,” while claiming tens of thousands — “maybe a hundred thousand or more” — had surrounded the Capitol. (In reality, the crowd’s size has been estimated at roughly 2,000.)

Footage captured from within the MAGA crowd at the same time showed rioters engaged with police, pushing them back towards the building, while throwing objects and dousing them in chemical spray.

It was important, Luria said, to understand not only what the president did that day, but what he had failed to do.

The committee presented taped interviews with Pat Cipollone, the former White House counsel, Keith Kellogg, the vice president’s national security advisor, and Nicholas Luna, former assistant to the president, each of whom testified they were unaware of any attempt by Trump to contact the secretary of defense, the attorney general, or members of the national guard. Kellogg, who testified that he would’ve been aware of any attempt at the White House to respond to the attack, said he knew of no instance in which the president called for a law enforcement response.

“We have confirmed in numerous interviews with senior law enforcement and military leaders, Vice President Pence’s staff and D.C. government officials; none of them, not one heard from president Trump that day,” Luria said. “He did not call to issue orders. He did not call to offer assistance.”

Luria then quoted testimony from an unnamed White House employee “with national security responsibilities,” who was said to have direct knowledge of a conversation between Cipollone and White House lawyer Eric Herschmann. The conversation reportedly took place ahead an expected call from the Pentagon, which sought to coordinate on a response to the ongoing insurrection. Herschmann turned to Cipollone, according to the employee, and said the President wanted nothing done.

Confirming news reports from earlier in the day, Luria said that some Secret Service members had chosen this week to retain private counsel. The agency has faced intense scrutiny since last Thursday over the apparent purging of text messages from certain agents’ phones from the day of the attack. The agency has said that data was erased from the phones of some agents during a planned software migration that required their devices to undergo a factory reset.

News reports indicate that the agents had been advised on multiple occasions to back up any messages ahead of the migration — a practice which is standard throughout the federal government — and that the purge also occurred after Congress had requested access to communications overlapping with events leading up to Jan. 6. The Department of Homeland Security’s Office of the Inspector General had similarly requested access to the messages, but was told none existed relevant to its inquiry. (DHS is the umbrella agency under which Secret Service operates.)

“Do you think it looks like we’re effing winning?”

In a post on Truth Social, the social media platform created by a tech company founded by Trump in October 2021, the former president said Wednesday that he, too, would like the Secret Service messages to be found, if only to disprove claims that he “lunged” at the agent driving his SUV in an attempt to divert the vehicle east toward the Capitol building.

Interviewed live, Sarah Matthews, Trump’s deputy White House press secretary, said she pushed to condemn the violence during the 187 Minutes, but had heard other aides opposed to the optics of Trump tweeting out a call for his supporters to disperse. Both she and McEnany had recognized, Matthews said, “that the situation was escalating and escalating quickly,” and that Trump needed to issue an immediate call for the mob to cease the attack and go home.

Matthews said that aides were concerned about giving the media a “win.” She responded, pointing at the television, “Do you think it looks like we’re effing winning?”

Instead of heeding the advice of his aides, Trump again contacted Giuliani. Moments later, Luria said, “rioters broke into the Capitol itself. One of the Proud Boys charged with seditious conspiracy, Dominic Pezzola, used an officers shield to smash a window and rioters flooded into the building.”

According to testimony by Gen. Mark Milley, chairman of the Joint Chiefs of Staff, Pence was meanwhile attempting to direct the military to quell the attack. Milley said that Trump had not given any orders to do and that Mark Meadows, Trump’s chief of staff, seemed more concerned with advancing a “narrative” that Trump was in control. Milley said the opposite was true, that Pence was the only one giving orders. Milley said the conversation was, for him, a “red flag”.

The committee concluded the hearing with shocking outtakes from Trump’s address on Jan. 7, 2021. The clips showcase his reluctance to abandon the conspiracy that the 2020 election was rigged, to chastise his supporters, and to condemn the violence at the Capitol.

“This election is now over,” he said into the camera. “Congress has certified the results.”

Trump, who appeared to being have some difficulty reading, then paused, telling someone off-screen, “I don’t want to say the election is over.”