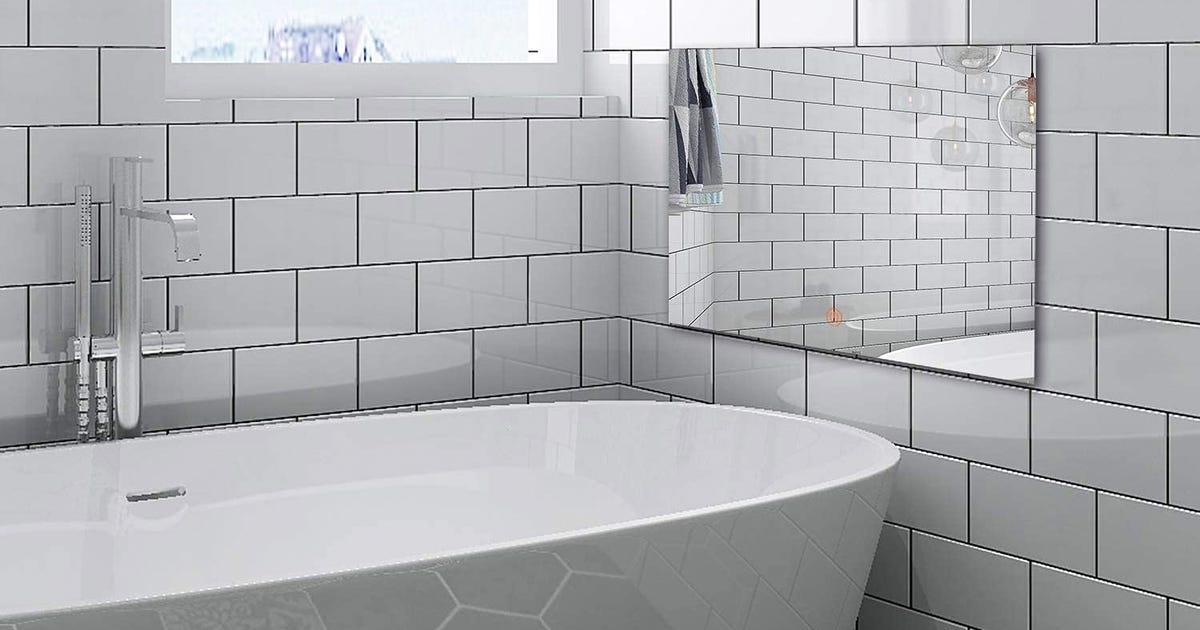 There are lots of good places to mount your TV, but there are also a few places where mounting a TV is not the best idea. The bathroom is one of those places. In fact, it’s just about the worst environment for any type of electronics, let alone a TV.  But if you’re so hooked on a show you’re streaming that you don’t want to hit pause even for a bathroom break, you may think mounting a TV above the bath or toilet is a good solution. It’s not. Really. Just don’t.

But if you absolutely must, mounting a TV in the bathroom is technically doable, as long as you know what you’re getting into. Here’s what you need to know before you start watching National Treasure during your morning constitutional.

A bathroom is a bad place for a TV. Two of the worst things for electronic gadgets are moisture and heat. The latter is also one of the reasons why we don’t recommend placing a TV above a fireplace. Even if you have a large, well-ventilated bathroom, it’s likely much more humid than a typical living room.

For example, here’s what Samsung has to say about bathroom TVs:

Here’s the relevant section in LG owner’s manual for its 2022 LED LCDs:

Do not place the TV and/or remote control in the following environments:
– An area with high humidity such as a bathroom.
– Near kitchen counters or humidifiers where they can easily be exposed to steam or oil.
– Do not expose to dripping or splashing and do not place objects filled with liquids, such as vases, cups, etc. on or over the apparatus (e.g., on shelves above the unit).

Sony’s TV warranty, for its part, doesn’t cover “contact with liquid, heat, humidity or perspiration,” all of which are pretty much par for the bathroom course.

Will humidity destroy the TV instantly? Probably not, and that’s part of the problem. You’ll likely hear or read plenty of anecdotal stories about how someone put a regular TV in their bathroom and it was “fine.” However, these people probably won’t follow up with how the TV later died “for no reason.”

To compound the problem most people will want to put the TV where it’s easily viewable from the tub or shower, namely up out of the way. Unfortunately heat and steam rise, especially when drawn ceiling-ward by a bathroom fan.

There are waterproof TVs designed for high-humidity areas but, as you’d guess, they’re more expensive than regular models. They also don’t feature names you’d recognize: Elecsung, Soulaca, Haocrown and others. Many have streaming apps built in. Some even double as a mirror when turned off. We haven’t tested any of these models, but they cost at least three or four times as much as standard TVs of similar size.

Also, be wary of any lists on sites like Best Buy or Amazon that seem to suggest “bathroom TVs.” These are filled with normal, small TVs that shouldn’t be in a bathroom.

Things to consider for a bathroom TV

Like other waterproof gear, for example headphones and Bluetooth speakers, waterproof TVs should have an IP rating. For example, “IP66-Certified Waterproof” means it’s sealed against dust and jets of water aimed directly at the device.

Voice control would be a plus, for sure, but don’t expect waterproof TVs to have the same features as a typical TV. For that matter, their smart TV interfaces are likely worse than you’re used to, and might not have all the streaming services you’d want. Check user reviews carefully, if you can find any.

What’s not important? Resolution. Don’t worry if the TV is 1080p or 720p. With small TVs you’re not likely to see much of a difference, if any.

It’s also worth checking to see if your Wi-Fi is up to the task. The signal might be strong enough to surf the web while you’re enshrined on your throne, but streaming video is another story. You probably don’t need to get any new gear, just give your current Wi-Fi a tuneup.

Check local building codes for any specific regulations for installing or mounting an electrical device in your bathroom. You can also mount a TV in the wall, but that’s well beyond the scope of this guide and likely not something for the average DIYer.

Maybe you don’t need a “TV.” Smart home displays like the Amazon Echo Show and Google Nest Hub can fit just about anywhere. They’ll run Netflix and some other streaming services. You won’t get full TV functionality, nor are they waterproof, but they’re cheap and far easier to fit in your bathroom. Just keep them away from the tub.

Another possibility is a simple waterproof Bluetooth speaker. I’ve had one of these in my shower for years. Certainly not a TV, but you can listen to music, news or podcasts. They have the added benefit of being inexpensive and, of course, portable.

A common option is a tablet, usually with the addition of some kind of stand or bath tray. Certainly risky for an often-expensive device, but it’s easier than mounting a TV in someplace that’s essentially a temporary sauna.

It’s also worth noting that most mid- and high-end phones are waterproof. Most tablets are not. So if you can handle a smaller screen, it’s definitely a safer bath-time option.

‘Bathroom TV, you’re the one’

More than ever, we all need a place to relax. I have a close friend with an extremely stressful job who winds down after a long day by watching shows on a tablet while soaking in the tub. I absolutely get it.

Permanently mounting a TV in your bathroom, however, should be approached with caution. These are not good environments for electronics to live in, as evidenced by the warnings and warranties of manufacturers.

With a TV that’s designed for it, or something inexpensive you don’t mind replacing regularly, they’re certainly better than holding your phone with one hand and your toothbrush in the other.

As well as covering TV and other display tech, Geoff does photo tours of cool museums and locations around the world, including nuclear submarines, massive aircraft carriers, medieval castles, epic 10,000 mile road trips, and more. Check out Tech Treks for all his tours and adventures.