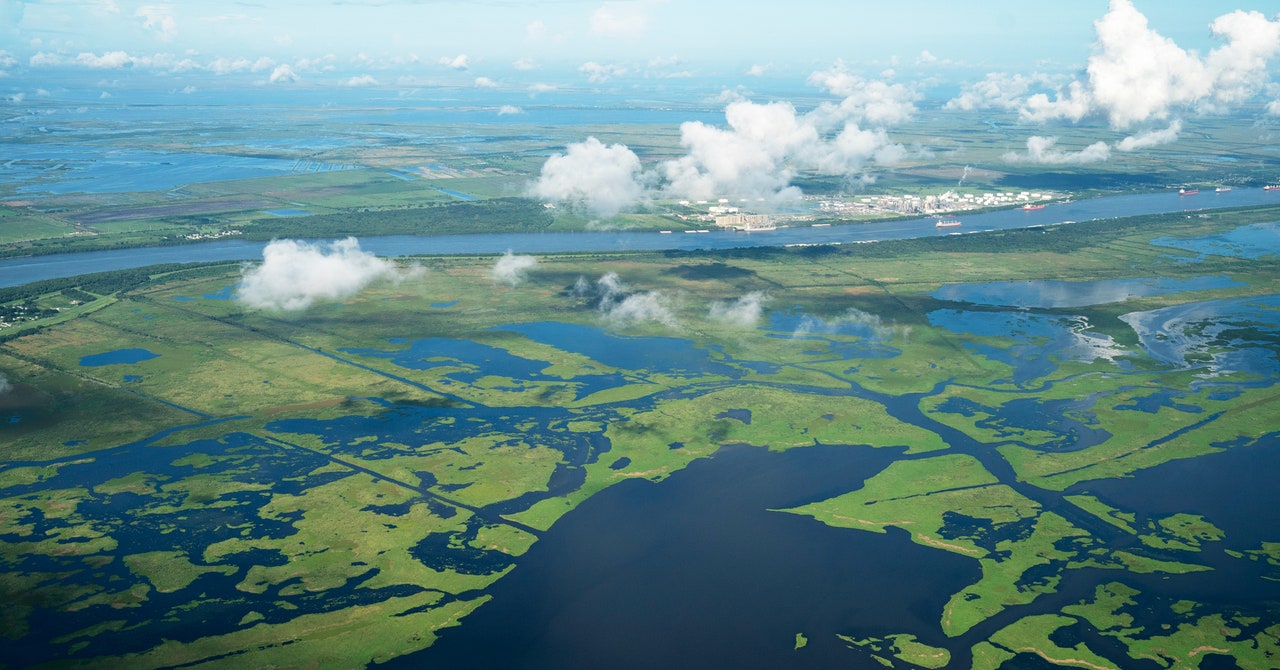 The LSU report, though, became best known for its proposed solution, which focused on counteracting levees. The authors suggested that some water and mud be diverted out of the Mississippi, back into the marshland. Let the river resume the work it had been doing for thousands of years, before it was restrained, in other words. It’s an idea that has captivated engineers and ecologists ever since.

To test the concept, scientists began to cut through the natural banks near the river’s mouth. (Because the land near the mouth was so irremediably swampy, levees were never built along the river’s last few dozen kilometers.) By the end of the 1980s, the US Army Corps of Engineers was working on a more substantial “diversion” at a site called Caernarvon, just upstream of Plaquemines Parish: Here, a set of gates allows water to pass through a tunnel beneath the levee and into the marsh. The project’s official purpose is to supply fresh water to the marsh’s delicate plants. When construction began, though, local newspapers described the project as a potential conduit for sediment—not just a way to preserve marsh, then, but also to rebuild it. Indeed, just a few years after the gates were opened in 1991, hundreds of hectares of new marsh had formed.

By then, the federal government had begun to fund other restoration projects, too. Soil dredged out of the river was dumped along the coastline; rock walls were built along eroding beaches; new sand was added to the barrier islands that sit just beyond the delta; a second small freshwater diversion was built. But those efforts weren’t enough to do what many believed was necessary: to build the kind of large diversions that could construct entire sub-deltas.

Then, in late 2005, Hurricane Katrina walloped New Orleans, kicking up enough gulf water to submerge much of the ridge-top city. The missing marshland, many scientists pointed out, could have absorbed some of the power of the storm-driven waves, serving as a kind of hurricane speed bump. Ecological arguments had never prompted significant action, but damage to private property proved different. Three months after the storm, the state launched a new agency, the Coastal Protection and Restoration Authority (CPRA), which oversees both coastal restoration and flood protection.

The next year, an agency official approached leaders in Plaquemines Parish to discuss a proposal for a large-scale diversion. The state wanted to situate the diversion near the community of Myrtle Grove, a collection of luxury homes on stilts above the marsh in Barataria Bay. The local reaction—from the fishing industry, from the local oil companies, from the farmers who grow citrus on the ridge here, and from the homeowners—was, as the Times-Picayune noted at the time, a near-unanimous “no, thanks.”

The bad blood goes back generations to a massive flood that rolled down the Mississippi in 1927, inundating much of the US South. This was the Hurricane Katrina of the era, a disaster that seized the nation’s attention. As the surge of water approached New Orleans, officials received permission to travel downstream with dynamite and blast a hole in the Mississippi River levee, which had grown so big that it was now seen as a problem. The floodwaters, trapped, grew higher, threatening to run over the levee’s top. City officials hoped that by giving the water another outlet, the water would drop near New Orleans. Indeed, the city was spared, though Plaquemines Parish was inundated. The residents had been promised compensation for the damage, though little ever arrived.