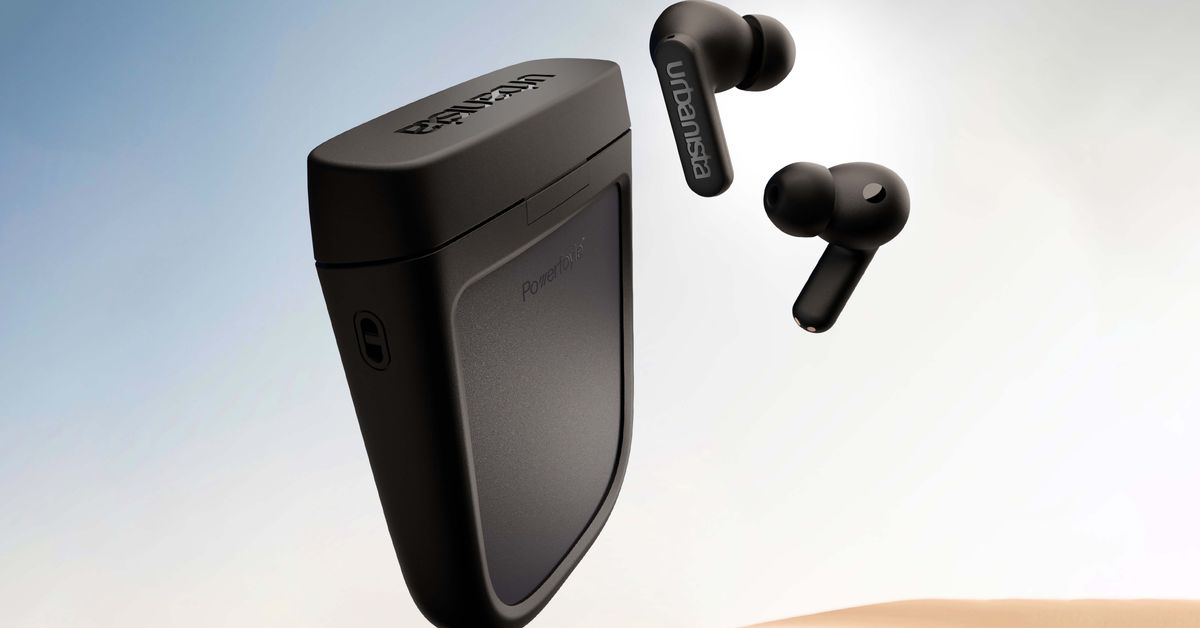 Urbanista is following up its solar-powered over-ear headphones from last year with a pair of solar-powered true wireless earbuds called the Phoenix, the company officially announced today. Like the headphones, Phoenix uses Powerfoyle solar panels produced by Exeger to extend their battery life with power from the sun’s rays. But unlike the Los Angeles headphones that have solar panels built into the headband, the panels aren’t included on the Phoenix earbuds themselves. Instead, they’re built into the Phoenix charging case.

The decision to shift the solar-charging tech to the charging case makes sense given the small size of the earbuds. But it’s likely to mean that users will have to make an effort to keep the solar panels directed at the sun. A headphone band on top of your head is going to be ideally placed to pick up the sun’s rays whenever you’re using them outside, for example, but most people tend to keep their earbuds’ charging case in their pocket or bag while listening out and about.

Urbanista says the Phoenix can get 8 hours of playback from the buds themselves. Combined with the charging case, however, you’re looking at around 32 hours of total playback, and this should increase by around an hour for every hour spent in direct sunlight. As with the previous Los Angeles headphones, the charging status of the Phoenix can be tracked from Urbanista’s companion app, which also offers the option of adjusting the earbuds EQ, or customizing its touch controls.

Away from the solar charging, other more traditional earbuds features include IPX4 water resistance (which should mean they’ll deal ok with sweat but not a heavy downpour), support for Bluetooth 5.2, and a USB-C charging port to top up their power when they eventually run dry. The Phoenix earbuds support active noise cancellation, have a transparency mode for hearing the world around you, and there’s also the option of connecting to two devices simultaneously (helpful for taking calls on a phone without forgetting a connection to a laptop). Available color options include black and pink.

While Exeger’s CEO Giovanni Fili confirms the Phoenix are the “world’s first Powerfoyle-powered true wireless earphones,” it’s less clear if they’re the first solar-powered earbuds ever. A company called Pearl Audio previously announced an Indiegogo campaign to fund a similar pair of earbuds, but it doesn’t appear as though these “AI-Powered Earbuds” ever actually shipped. The campaign’s last update was from last November, and as of this writing its crowdfunding page has been suspended and is filled with comments from backers requesting refunds.

In contrast, Urbanista has a much better track record, having already released a pair of solar-powered headphones last year. But we’ll still have a little longer to wait for the release of the Phoenix, which aren’t due to ship until the fourth quarter of 2022. When they’re released, the should be available globally at a price of $149 (£129, €149).